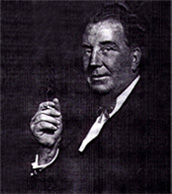 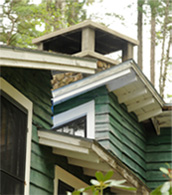 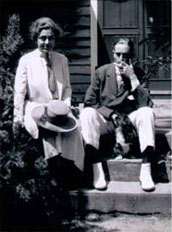 At the turn of the twentieth century, much of the St. Regis Lakes area was owned by Paul Smith - lumber baron, inn keeper, and raffish raconteur. Many of Smith's prominent hotel guests subsequently purchased lake front property from Smith to build their own summer homes, or "camps," as they came to be known. One such buyer was Archibald S. White, a prominent New York banker, and his socialite wife, Olive. The Whites purchased 35 acres -thick with white and red pine - overlooking what then was called Lake Osgood.

In 1907 White commissioned New York architect William Massarene to design the camp he would build, just a short boat ride from Paul Smith's Hotel. Ben Muncil, the region's unschooled master camp builder, began construction of White Pine Camp in 1908. Three years later, White hired architect Addison Mizner to design several additions and alterations to some of the buildings. White Pine Camp was one of Mizner's first commissions. He went on to become one of America's leading architects and the visionary behind the development of Boca Raton, Florida.

The camp that Massarene, Muncil and Mizner designed and built would be architecturally unique among the Great Camps of the Adirondacks. Its 20 original buildings included an owner's cabin, dining hall, four sleeping cabins, two boat houses, an indoor tennis house, bowling alley - and the Japanese tea house that would become one of the Adirondacks' most iconic images. But unlike the heavy log style first developed by William West Durant or the ornate artistry associated with later Adirondack styles, White Pine Camp's builders championed a more subtle rustic expression. Their "pre-modern" composition featured soaring roof lines, asymmetrical -shaped buildings, and the extensive use of dramatic, natural lighting. If windows are indeed the eyes of a home, White Pine Camp's unusually shaped windows -in corners and clearstories -open every room to a kaleidoscope quality of natural light textures.

Another one of the builders' innovations was the rough-milled siding developed by Muncil and Paul Smith's millwright, Charles Nichols. It was a compromise between the architect's desire for a more traditional clapboard siding and the rustic slab siding of more typical Adirondack camps. Muncil and Nichols' brainstorm siding, as they humorously referred to their innovation, soon became a common element of Adirondack architecture.

In addition to its innovative architectural style, White Pine Camp's designers surrounded their buildings with the most extensive landscape architecture of any Adirondack rustic estate. Its masonry walls, paths, and bridges, flower plantings and lush rhododendron gardens create a medley of natural elements that embrace the camp's grounds.

IRWIN & LAURA KIRKWOOD -White Pine Camp was sold in 1920 to Kansas City Star newspaperman Irwin Kirkwood who, with his wife, Laura, expanded the living room and the camp's service complex as well as enhancing the landscaping.

Laura Kirkwood was a close friend of Mrs. Calvin Coolidge. When Laura Kirkwood died in 1926 her husband offered his camp to President Coolidge and Mrs. Coolidge for the summer season. From early July through mid September, White Pine Camp served as the summer White House for the President and his family. Among their guests were governors and ambassadors, labor and business leaders, cabinet members and a future president -Secretary of Commerce Herbert Hoover. The President spent more time angling for bass and pike than he did tending to his executive duties - a fact that newsmen chronicled with almost every cast.

PAUL SMITH'S COLLEGE -From1948 to 1983 White Pine Camp was utilized by the college for summer programs, student dormitories, classrooms and staff quarters. Years of heavy use, followed by several years of abandonment (from 1976 -1983) took a heavy toll on the camp's condition.

WARREN STEPHEN - purchased the camp in 1983 and over the next ten years managed to stabilize some buildings while others fell further into disrepair.

HOWARD KIRSCHENBAUM -White Pine Camp was purchased in 1993 by Adirondack historic preservationist Howard Kirschenbaum of Rochester and Raquette Lake, N.Y. He and several associates began the arduous task of restoring the camp, replacing roofs, repairing bridges, installing new electric, water and sewage systems, furnishing the camp's many buildings and developing a series of exhibits to interpret the camp's history and architecture.

White Pine Camp ASSOCIATES, LLC - was created in January, 1997, and ownership shares were offered for sale. Today, nearly 40 owners operate White Pine Camp as an historic site to educate and inspire future generations. While the owners enjoy use of the camp's 13 unique structures for up to four weeks each year, all of White Pine Camp's facilities are open to the public on a rental basis. From time to time, camp ownership shares become available. For information contact the camp's manager at info@whitepinecamp.com.